It was not unusual for the phone to ring at MMA Joensuu, the local gym in Joensuu, Finland. But when muay thai coach Tuure Mutanen answered, the call wasn’t exactly what he expected: a young woman asking, could he find her a fight? And how soon?

Mutanen asked the caller what her experience was. None, was the reply – she’d been to the Finnish Muay Thai Championships the night before, and watched the flyweight women’s fight, and decided it looked like fun.
Baffled, Mutanen could only suggest, “What if you come in and train first, and then we’ll see about getting you a fight?”
The next day, Niina Carita showed up at MMA Joensuu, ready to train.

Niina wasn’t completely new to martial arts. She’d trained in aikido since 2002, and experimented in other martial arts styles. But when she saw that muay thai fight, something clicked: “I wanted to be like (the fighters),” Niina recalls.

At the beginning, Niina was training with Mutanen at MMA Joensuu twice a week. Then four times a week. After a year, that frequency increased again to twice a day, six days a week. In 2012, just two years after she started learning muay thai, Niina won the Finnish championship and made the Finnish National Muay Thai Team. She also has 14 amateur fights under her belt. 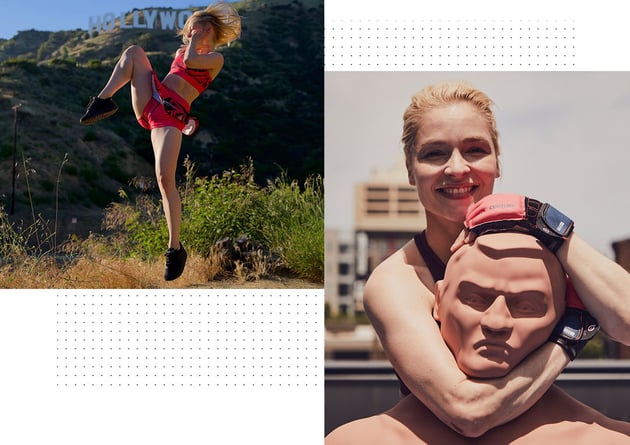 Watch just one video of Niina training, and it’s immediately clear how much she loves the physical aspects of training. You’ve never seen anyone throw an elbow or send leaping knee straight into BOB’s face with so much pure glee. But although perfecting her skills and learning new ones – not to mention physical health – are important to Niina, but they’re not the “soul” of martial arts.

“It meant the most to share my journey with others as a competitor,” Niina says. “Those familiar faces every day in the gym, winning and losing together but most importantly - growing together!”

In 2019, Niina moved from Finland to the United States. Unfortunately, it was shortly after that the COVID-19 pandemic hit. Gyms and training facilities shut down for months. Instead of live training, Niina turned to social media, posting her training, advice, and martial arts content (as well as absolutely hilarious short skits starring BOB!).

Gyms have opened back up, and Niina and other LA martial artists are more than ready to return to normal. But Niina isn’t planning on dropping the community she’s made online – in fact, it’s still growing! Niina hopes to continue to be a positive influence and inspiration for everyone training, especially those new to the arts.

“I can be your martial arts big sister, so don’t hesitate to contact me!” she said. “I’m always ready to answer your questions about training and fighting!”

The Food Side of Fitness

BJJ vs Jujutsu: What's the Difference?