Europe has given the world some pretty cool things – lasagna, the printing press, and like nine of my top ten favorite actors. There have also been some pretty cool martial arts to come from the region. In the past, we’ve looked at African martial arts, and today, we’re looking at some from Europe! 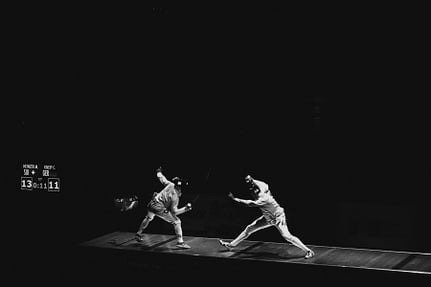 European martial arts such as pankration, fencing, and savate date back centuries and have influenced many of the martial arts you enjoy participating in and watching today. Here are three of the most popular martial arts born not in the Far East but in Western Europe.

What do you get when you take the punches of boxing and combine them with every single wrestling hold? You get the ancient Greek martial art of pankration, a no-holds-barred sport that's essentially a more savage take on modern mixed martial arts. The only forms of contact that are against the rules in pankration (Ancient Greek for "all force") are eye, nose, and mouth gouging, biting, and assaults on your opponent's genitals. Even the Ancient Greeks had standards.

Long video, but worth the watch!

While most scholars trace pankration back to the 7th century BCE, Greek mythology asserts that it was created by Heracles, the god of strength, and Theseus, the founder of Athens, who used their pankration expertise to defeat a minotaur and a magical lion, respectively. Mere mortals first began competing in pankration at the 648 BCE Olympics, and soldiers frequently utilized their pankration training on the battlefield.

The sport's modern resurgence began in 1969 and made its way around the globe in 1973 when pankration proponent Jim Arvanitis, a Greek-American fighter, extolled its virtues in a Black Belt magazine feature. While it has never been reestablished as an Olympic event, many cite it as the precursor to present-day mixed martial arts. American UFC Flyweight Champion Demetrious Johnson is just one of several UFC fighters who have trained in pankration (probably without the help of a minotaur, though).

Pop quiz: Which of the European martial arts is one of only five events that have been held at every modern Olympic Games since 1896? If you guessed fencing, give yourself a careful pat on the back with your épée.

Épée is just one of three different disciplines of this popular martial art, each named after the type of weapon used. The modern form of the sport dates back to 18th century Italy, and its other two masteries are foil and sabre. Singlestick fencing was also an event at the 1904 Olympics but was quickly scrapped.

In addition to using different weapons, each discipline has different rules, but they all boil down to skillfully fighting with swords.

Although fighting with rapiers became all the rage in Renaissance Italy, its roots lie in the middle ages. The oldest known sword fighting manual was created around 1300 CE and originated in Germany. If your medieval Latin and Middle High German language skills are up to par, you can read it yourself at the Royal Armouries Museum in Leeds, England.

Today, fencing is still based in Europe. Its international governing body, the Fédération Internationale d'Escrime, is stationed in Lausanne, Switzerland.

Savate, also known as French foot fighting, is a form of martial arts that mixes boxing and kicking. And unlike muay thai, where the aim is to strike your opponent with your shins, in savate, it's all about the feet.

I'll be honest, I chose to show this video because I think old videos are cool.

French for "old shoe," savate was born from French street fighting in the early 1800s. It was particularly popular in the poorest areas of northern France. Kicks were kept low, and slapping played a prominent role. These weren't your dramatic Aunt Sylvia's third-glass-of-Chardonnay slaps, either; these were slaps designed to injure facial nerves.

Modern savate is just a wee bit more refined. Fighters, known as savateurs, compete at one of three levels: pre-combat, combat, and assault, and they can pursue one of three tracks: technical, competition, or teaching. A student's progress is marked by his or her glove color. Newbies start off with no color. On the technical track, for example, he or she then progresses through eight colors culminating in silver level III. Unlike karate belts, a savateur doesn't physically change his or her actual gloves.

Pankration, fencing, and savate are just three of the European martial arts that have gained worldwide attention for their intricate mix of combat and athleticism, of punches and kicks, of delicate swords, Old World charm, and cheek-trembling slaps. While pop culture may often pay more attention to Asian martial arts, their European counterparts have had a profound and lasting effect on many of today's most popular martial arts disciplines.