Before you go any further, read part one of this blog here, and part two here.

All caught up? Okay!

I made it! I went all month without eating added sugar!

As anyone who has gone down the no-sugar path can tell you, it’s not easy.

So, what made this month successful when last month failed? Half of the credit goes to my own stubborn, competitive nature. The other half goes to my equally stubborn and competitive coworker, Drew, who agreed to join me for sugar-free September.

Despite each of our best efforts (including homemade cupcakes, caramel cinnamon rolls, candy corn and Oreo chocolate bars) we were both able to resist eating sugar. The rest of our coworkers, who were not sticking to an anti-sugar regimen, were very happy about the amount of baked goods suddenly available. Drew and I have both been encouraged to keep this challenge going for as long as possible, in fact.

And, we may. In fact, Danielle (who you know through Friday’s Century Challenges on Facebook, and our social media in general) expressed interest in joining this month, with the exception of her birthday, which seems only fair. A few other coworkers have been participating on-and-off, reducing the amount of sugar they eat if not cutting it out completely.

Basically, what I’m saying is, if you’ve been thinking about stopping sugar, and you’re looking for a support network/team to join, jump on in! You can leave comments on this blog, or connect with us on Facebook!

So, What Happens When You Go Sugar-Free?

You have to do a lot of label reading. Because everything has added sugar.

You get good at saying “No” to polite offers—and people are nice about it. I was so worried I was going to hurt someone’s feelings. However, no one ever made me feel like I was being rude for turning down sweets. Everyone was very supportive! When I tagged along with my mom and sister to get ice cream, they didn’t make a big deal out of me not getting any – we all just had fun hanging out as a family, ice cream or no! 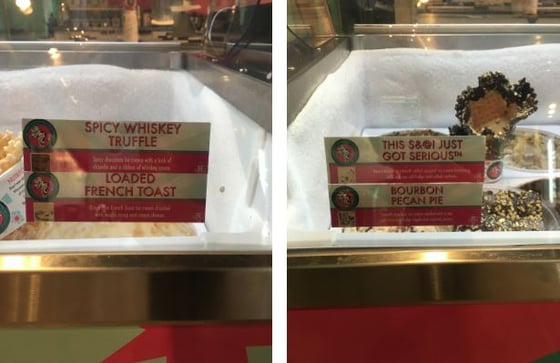 This is what I gave up for this blog. Ice cream in the top right says it all.

You get a sense of how much sugar you were eating before. When I was saying “no” to ice cream at a friend’s house, or not letting myself buy a candy bar at the check-out like, I was also realizing that normally, I would have eaten those things. It would have added up to a lot.

You'll feel tired at first… This wasn’t too bad for me – I was a little drowsy and just blah feeling for one or two afternoons.

But pretty soon you have more energy than before! To be fair, this could also have come from the massive amounts of coffee and tea I drank to distract myself from the Oreo candies stuffed into every possible nook and cranny at my desk (thanks, Drew…).

Your skin might clear up. I floated through high school on a blessed cloud of perfect skin. Then in adulthood zits smacked me in the face all at once. However, I have noticed that my skin has been a little better this month than usual. My guess is, it would only clear up more with more time.

You may not lose weight… I didn’t. This was not disappointing, exactly, because health is so, so much more than numbers on a scale. Still, I’d be lying if I said that I didn’t expect to lose at least a few.

Drew, on the other hand, lost some six or seven pounds, with no other changes to exercise or eating! (That said, he already has a pretty intense exercise schedule from Century on-site classes alone.) So the takeaway is, if your health goals do include trying to lose weight, there's a good chance cutting sugar will work for you!

But you will feel healthier overall! Some of that, I think, was purely mental. Because I knew I was doing something healthy, I felt healthy. However, I do think some of the feeling was, hopefully, actual health setting in.

All in all, it’s been a worthwhile experience! I think I’m going to stick with it a while longer, just for fun. And because I kind of like feeling this healthy! And because, at the start of all this, I promised two months without sugar.

…And because I’m still stubborn and competitive and Drew still hasn’t eaten sugar and I’m not losing this challenge gosh darn it!

If you’ve ever done anything similar, let me know in the comments! I’d love to hear your stories!