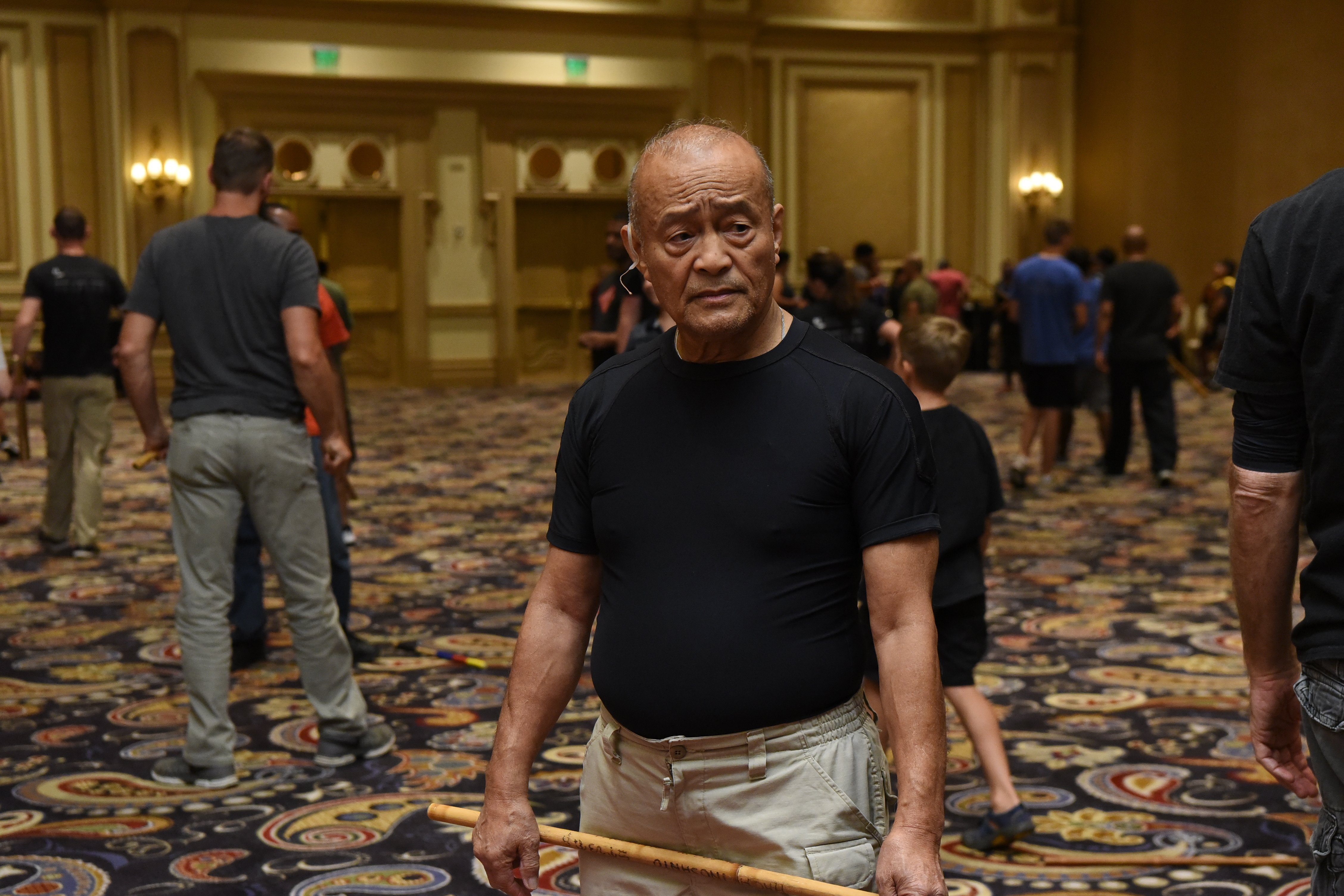 On July 24, 1936, Dan Inosanto was born. As a 4th-grader, he received his first exposure to the martial arts when his uncle taught him te [the Okinawan word for “hand.”]. In college, he studied judo, then dabbled in the Korean, Okinawan and Japanese striking arts.

“The exposure to the various schools in the beginning taught me not to be one-sided, because everyone had his own philosophies and each school seemed to have its good points and bad points. When I learned from Bruce [Lee], we never classified whether a technique was from taekwondo or boxing. If it was usable, we used it.” 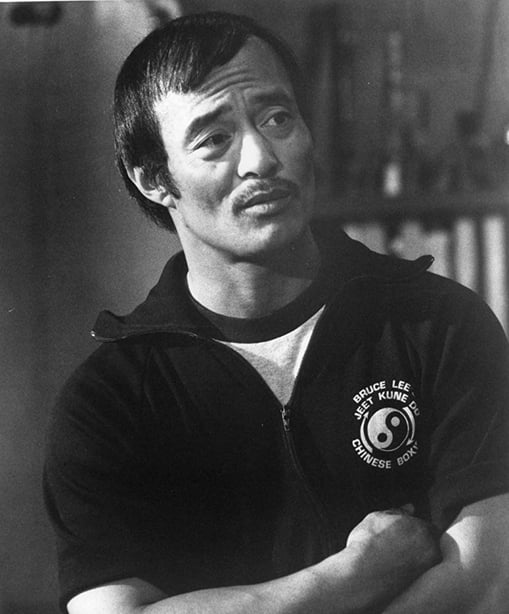 While he was stationed at Fort Campbell, Kentucky, Inosanto was impressed by a kenpo brown belt he met. Specifically, he liked the fluid manner in which the martial artist moved. As soon as he was discharged, Inosanto relocated to Southern California.

“In 1961, I started taking kenpo from Ed Parker at his Pasadena school. At that time, kenpo reached my expectations of what I was seeking in karate. I was looking for a self-defense and also a body-conditioning sport. I became fascinated by the martial arts field and how there could be so many different ways of fighting.”

At age 28, Inosanto received his 1st-degree black belt in kenpo after three years under Parker. On his master’s suggestion, he began training in the blade arts of kali and escrima. His teachers included John Lacoste and Angel Cabales.

“There has always been a stigma that if you fight with a sword, it’s a gentlemanly duel, but if you pull out a knife, it’s a dirty fight. Now, we are pointing out that there is an art to this also.”

Inosanto met Bruce Lee in 1964 at the 1st International Karate Championships in Long Beach, California, where Inosanto was competing. The more he learned about Lee’s fighting philosophy, the more he longed to study under him. But Lee was a man on the go, with one foot in the East and one in the West. So, Inosanto spent his time learning various arts in Southern California. He quickly discovered that what he was doing was a far cry from what Lee advocated for self-defense. 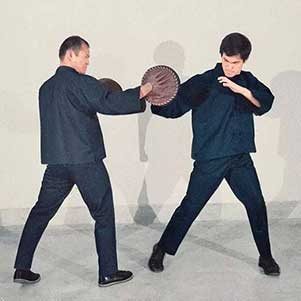 “What they were teaching — the forms, the blocks, the posturing — wasn’t realistic. The means to get good at self-defense became the ultimate end. Their teachings didn’t seem to have any direct relationship to self-defense, although it probably taught me to be graceful and helped with my coordination, posture and smooth, correct body movements. [The instructors were] attempting to teach how to fight without actually fighting.” 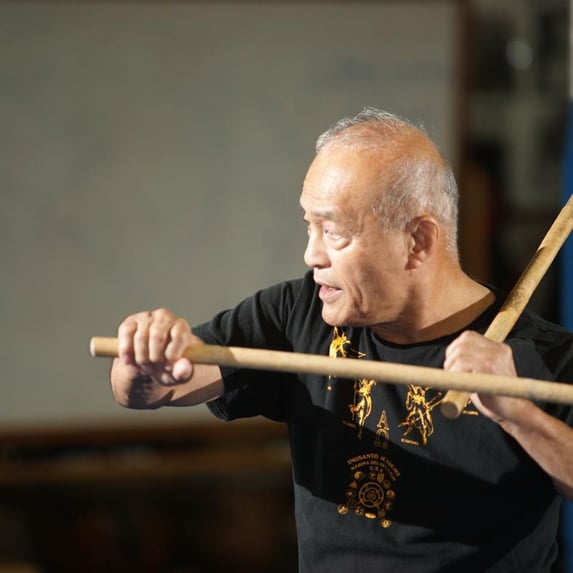 “It wasn’t until I started learning jeet kune do under Bruce [that] I found a style that used all three important aspects of fighting (speed, power and deceptiveness). Bruce was able to take all the pieces of the puzzle and make them fit together in an integrated system.

“Bruce took something from everybody. He liked Muhammad Ali’s footwork and admired his outside fighting. He liked [Rocky] Marciano’s short punches. He used to study all the knockout punches of Joe Louis.

“It’s not that he embraced Western boxing completely. He felt there were many flaws in boxing, too. But he also felt that out of all the arts in the hand range, boxing had more truth than, let’s say, karate. Not that karate was all flaws — he saw the truth in karate, too. Boxing, he felt, was over-daring, whereas he found karate to be overprotective.”

And, most importantly, Dan Inosanto, martial arts philosopher, was born.

“A man doesn’t excel because of his style. It’s only when a man can go outside the bounds set by his system that he excels. If a martial artist can practice a style without being bound and limited to his particular school, then and only then can he be liberated to fit in with any type of opponent.”

While studying under Lee at the Los Angeles JKD school, the path Inosanto walked didn’t get any easier in terms of philosophy.

“By that time, I had stumbled across many partial truths, and I had become more aware of workable and unworkable techniques. Being a die-hard kenpo man, I found myself confused and frustrated. I began to actually rebel against jeet kune do. I was bound by loyalty to my former instructor and his style.

“Looking back on it, I really didn’t want to see the truth in self-defense. I began to mentally criticize the informal and unstylized way JKD moved, kicked, punched and trained. Yet, I found myself using what I had learned and liking it better than kenpo, finding it more functional, powerful, faster, freer and, above all, the easiest style to express.” 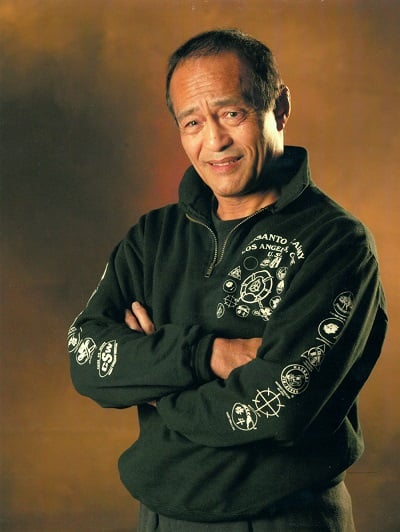 His ultimate acceptance of the JKD way led him to further analyze the fighting arts of the world to see where they might fit into the big picture he was developing — always while keeping his mind open.

“Karate is mainly a stylized form of punching and kicking. Judo is a throwing, grappling and choking sport. Wrestling is grappling, and boxing is a punching sport. All of these arts or sports are highly effective in their range of distance. What boxers call the ‘in-fighting range’ is never reached in a karate tournament, because the referee usually separates the combatants before they reach this stage of fighting. But in reality, isn’t this where real fighting begins?

When Lee shuttered his school in L.A.’s Chinatown, he left his students to train with Inosanto, who was forced to tread the fine line between carrying on what his master had taught him and continuing JKD’s evolution. It was especially true after Lee passed away in 1973.

“We use pretty much the same kicks that Bruce handed down, but I would say kicking has evolved in a subtle way that is taking place even now. When I was training with Bruce, we used a lot of side-kicking, low side-kicking and angling of the side kick. [Now] we go more with hook kicks and round kicks.

“We use material that’s similar to muay thai [Thai kickboxing]. You can block with the kicks, and you can obstruct with the kicks. Muay thai has added to our understanding, as have [Burmese] bando and [French] savate. They added more. More doesn’t mean better, but more gives you an understanding of more types of attacks.”

Inosanto began using the term Jun Fan gung fu to refer to the art Lee taught him, and the term “jeet kune do” to refer to the path for personal growth. In the 21st century, the kali component remains an important part of his path. Mostly because of its practicality, but also because the art is more than just combat.

“People don’t [always] want to learn weaponry, but 80 to 95 percent of all confrontations on the street involve a weapon, either blunt or bladed. If you have no training with a weapon, you won’t even have a clue about how to defend yourself.

“The late grandmaster Floro Villabrille said, ‘Kali is you, and you are kali.’ What that means is that kali isn’t limited. It gives you the ability to do whatever you have the skill, creativity and intelligence to [do] in combat. That also means that kali has the potential to help you grow and evolve in your outlook, understanding and ability as a fighter and a human being.”

As always, he keeps an eye on trends in the martial arts world, such as the rise of grappling and then MMA [mixed martial arts].

“Jeet kune do is about being multidimensional. If a person is not multidimensional, he cannot really function [now]. In the 1950s, style went against style, and everybody punched the same. But nowadays, people strike differently, they attack differently. Some people are grapplers, some are strikers and some are a combination. The structure that fit so well in one decade may not be the structure you would use in the next decade.

“However, you have to start someplace. A person doesn’t just become adaptable. He needs a structure, and the structure Bruce gave it was Jun Fan gung fu.”

As anyone who’s studied the grappling sketches in [Bruce’s book,] Tao of Jeet Kune Do, will attest, ground-fighting is not unheard of in JKD. Inosanto just increased the emphasis.

“Bruce had already incorporated grappling techniques from Japanese jujitsu — including locks on the ground and throws — into his repertoire. The only thing that wasn’t the same as what we do today is that we would just sort of punch and kick and take each other down, but once we were down and had put the lock on, we didn’t try to escape.

“[Bruce] was researching different wrestling moves he thought would work with JKD. These techniques weren’t taught in the Chinatown school. But in our own personal training, we did a lot of one-on-one techniques and he did have locks. At the time, he believed — rightly so —that a lot of things like kicking and punching could be done strictly from the stand-up position. But he did throw people to the ground. He was a very good thrower and an excellent takedown practitioner — and he did a lot of locking.”

Because of Inosanto’s foresight, modern JKD students hone their ground skills, as well as their stand-up arsenal.

“The people that are in jeet kune do have adapted to learning how to survive on the ground. Most of them have at least trained in shootwrestling, Brazilian jiu-jitsu, [and] Greco-Roman or some kind of freestyle wrestling to balance themselves. I like to have all my students exposed to shootwrestling because it is a very good art and will make them more well-rounded.”

Technique, however, is not the most important lesson of JKD or the other martial arts Inosanto practices and teaches.

“Sifu Bruce had many ‘no fail’ techniques and principles, and they changed on a regular basis. [But] the one that never failed was his quest for self-expression through self-discovery. That’s because self-expression and self-discovery lead to self-perfection physically, mentally and emotionally.

“The never-ending process of self-expression and the belief in oneself [determine whether] what students choose to execute at any given time will work. I could list an encyclopedia of techniques that Bruce used and favored from month to month and year to year. But that wouldn’t benefit anyone as much as the true lesson and meaning of his art.

“What worked for Bruce may not work for everybody else. Different attributes like size, speed or even age will determine what you can use. You may learn four or five ways to counter a hook, but you may still get hit with the hook. It doesn’t mean the technique is inferior; it’s just that you’ve got to work on your own attributes, your own timing, your own positioning.

“I always liked a saying my mother gave me: ‘A failure is the fire that tempers the steel, thus producing a fine product.’ You need the setbacks. Setbacks make you want to learn. Bruce was correct when he said, ‘It’s from the old that you have security, but it’s from the new that you grow and learn to adapt.’”

This compilation post, made from an arrangement of Black Belt Magazine articles, originally appeared in MASuccess magazine and on the MAIA blog.

Side note: one time, this blog manager got to train with Guro Dan Inosanto at a seminar! Read about my experience here!

If You're A Fan of Samurai Movies, You'll Love These Modern Katana-Based Martial Arts!

Martial Arts and the Ancient Code of Honor