Eight Things I Learned from Attending My First Seminar 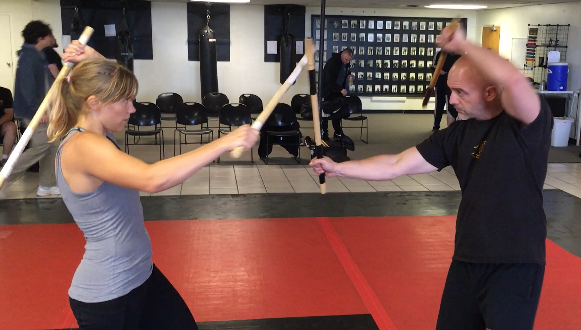 I started working at Century around three years ago, and quickly discovered the on-site martial arts classes. Within weeks of starting, I was hooked on Jeet Kune Do. I liked that it used bits and pieces of various martial arts – especially weapons!

Because there aren’t a lot of schools that teach JKD around me, and because until about a year ago, I was still training MMA, I didn’t get the chance to practice it outside Century. Then, a couple weeks ago, a chain of events led me to an amazing opportunity – getting to train with Guro Dan Inosanto at a seminar.

Here’s what happened. I’m Century’s writer. Our annual Martial Arts SuperShow is coming up, and, as you can imagine, our BIGGEST EVENT OF THE YEAR!!! needs quite a bit of writing. This includes writing the scripts for the videos for our Lifetime Achievement Award winners: Guro Inosanto and Grand Tuhon Leo T. Gaje, Jr. Google is a writer’s best friend, so I hopped on the search engine to find information for both –

– And what should come up as one of the first page of search results but a Guro Dan Inosanto seminar coming to Relentless Training Concepts in Tulsa, Oklahoma, less than two hours away from me! 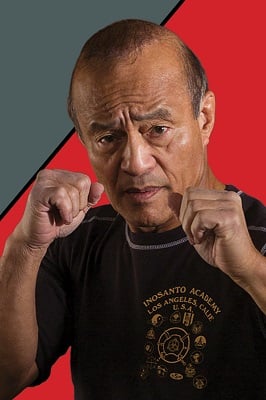 Luckily, I was free that weekend (I am free most weekends. I have no life lol), so I signed up. I’ve never been to a seminar before, and I was definitely in the minority. I know, obviously, that there’s a first time for everything – even the person who’s been to a million seminars had to have one they attended as a newbie. So, in case there’s anyone out there who’s reading this, who has never been to a training seminar before and is on the fence, here’s what I learned!

I didn’t know if seminar culture was usually “find a random person to work with” or BYOP (bring your own partner), but I didn’t have a choice: none of my regular training partners were available that weekend, so I wound up going solo.

It turns out, it’s a little bit of both. Most people come as part of a school, so a good chunk of attendees end up training with someone they’re familiar with. However, schools may bring odd-numbered groups of people, and there are bound to be at least a few solo attendees, so you won’t have a hard time finding a partner.

2) Don’t be afraid to ask someone to be your training partner.

Although, chances are, you won’t have to ask. I don’t know if I natural emanate awkward singleness, or if Relentless’ head instructor/owner Guro Brandon Bennett has just gotten good at realizing who’s alone because they’re waiting for a partner to arrive vs. who’s alone because they don’t have one, but within five minutes of me walking in, he asked if I had a training partner with me, and then assured me he’d help me find one if I needed one.

I didn’t even need to take him up on his offer, however, because another gentleman who introduced himself as Marcus stepped up and offered to work with me! 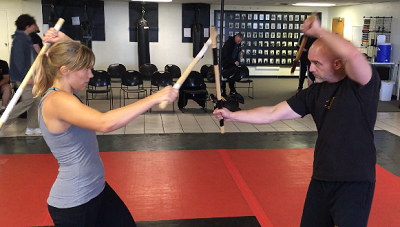 3) You will meet some really cool people.

The seminar presenter is going to be awesome, that’s a given. But so will the attendees!

It turns out that Marcus – Marcus Aurelius Anderson – is a published author, internationally in-demand keynote speaker, mindset coach, TEDx presenter, and kick-butt martial artist! This man went from being fully paralyzed to dying on the operating table – twice – to learning to walk again, to facing a possibly even greater challenge: trying to get me to remember which way to hold focus mitts from southpaw stance.

He didn’t tell me any of this when introducing himself, by the way. It only came up when Guro Dan happened to compliment Marcus’ book, which he’d recently read. I asked about it, of course, and also looked up his website later on my own.

Anyway, Marcus was an awesome (very patient) training partner and coach! And the book, The Gift of Adversity, is pretty good too.

Marcus, again, but also everyone there was incredibly friendly. The people I chatted with during the lunch break, the man who shot some cell phone video of me running through a drill – and let me get video of him – after the seminar so I could study it, and, of course, Guro Inosanto himself, who I got to meet briefly afterwards: nice, nice, nice!

So even if you’re the least-experienced person there (me), don’t worry! In general, martial artists are nice anyway so this shouldn’t come as a surprise. Ugh, I love this community so much.

This is a little bit “do as I say, not as I do.” This was a kali seminar, so I brought my escrima and Keen Edge training knife (yes, I am name-dropping a brand but you don’t understand how awesome these knives are), as well as sparring gear. But we ended up needing focus mitts, too, which I don’t have. I borrowed them from the school, as did several other people.

Now, here’s the thing: Relentless is a decent-sized school with a muay thai curriculum. It has plenty of equipment, but if some people hadn’t brought their own mitts, it’s still possible we would have been short. Bringing your own gear and freeing up communal gear for those who don’t have their own just seems polite. In retrospect, I should have brought my extra pair of escrima, too – although those are “well-loved” and 90% splinter at this point. (Okay, note to self, time to buy new escrima.)

6) Be prepared to struggle.

I was warned by my instructor that training at a seminar is like trying to sip water from a fire hose. As in, there’s a lot to take in and a limited means of doing so.

This is a lie. There is no hose. It is more akin to shoving your head into the geyser of a broken fire hydrant.

Seminars are not regular classes. A single class, though shorter than a seminar, is part of continuing curriculum that is intended to run for weeks, months or even years. A seminar presenter has a comparatively short time (three to eight hours, on one or two days) to cover the material he or she has decided to teach. As a result, seminars are incredibly fast-paced.

I’m not saying this to discourage you! I’m saying this so that when you go to your first seminar, you don’t get 20 minutes in and think, “Sarah made this sound way too fun and easy!” It is fun. It is not easy.

If you have a steel-trap memory, and have confidence in your ability to not only perform drills that you’ve seen demonstrated once, but also retain them well enough to repeat them later, then more power to you! If, like the rest of us mere mortals, the idea of cramming multiple classes worth of knowledge into your brain and storing it there without any written backup gives you flashbacks to high school finals, I advise you to bring a notebook.

You won’t be able to write during training, but there may be interludes between drills where you can scribble. If the seminar is longer than four hours, there may be a break for lunch, and you can use that time to write down what you remember.

Also, don’t worry about writing down every single thing. You’ll end up with nonsensical scrawls that ~maybe?~ relate to a drill. Instead, focus on writing down thorough descriptions of whichever drills/techniques you like the most, or will be most relevant to the rest of your training journey.

That’s it, that’s the big takeaway.

Getting to train at a seminar is a kick-butt experience, and everyone should do it at least once! I had a blast, and I’m still having fun incorporating the new drills I learned into my training.

If you’ve never been to a seminar before, this is one experience you want to be able to make sure you get!

Sooooo, now that you’re all pumped for seminars…

Remember back in the beginning when I mentioned the Martial Arts SuperShow? In addition to business seminars, the Show offers – you guessed it – tons of training seminars! Including one from Guro Dan Inosanto (if you go, and see me at the Show, let me know what you think)! There are preconference seminars, held in the days before the Show, as well as training sessions during the general show, so you can find something that fits your schedule.

Century Answers: Advice for Your First Day of Training

Things to Know Before Your First Day of Brazilian Jiu-Jitsu

Things to Know Before Your First Day of Kung Fu