The Journey of Shihan Dana Abbott 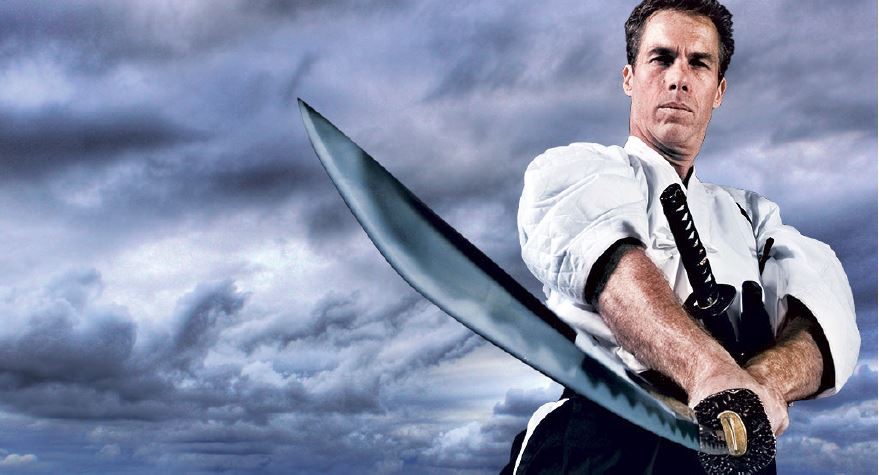 This story could be the plot of a martial arts action movie: a young man from Arizona dreams of learning swordsmanship, sets off for Japan to follow the same path as the samurai warriors from centuries past, and studies under one of the world’s premier masters to emerge decades later as a master in his own right. 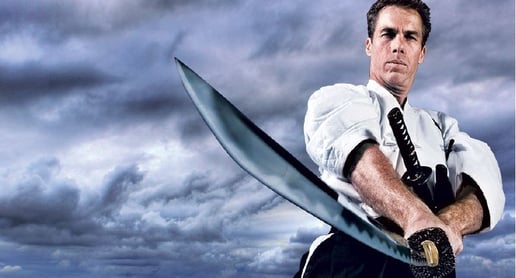 Although it would make a cool movie, this story isn’t from a film and it isn’t even fiction. Shihan Dana Abbott, seventh-degree black belt, recently recounted the story of how he came to join the ranks of top-echelon martial artist sword fighters for MASuccess magazine.

“Swordsmanship was always something that was a mystery, and held a great deal of intrigue for me,” Shihan Abbott said. “I became interested in it when I was a student at Arizona State University, and I searched, to no avail, to find a qualified instructor that I could relate to and learn from.”

Shihan Abbott graduated from Arizona State University in 1978 and went to work for a bank. It was a good, stable job, but, for Abbott, unfulfilling. He had earned a degree in geography from his time in college, and he decided to put it to use in the best way possible. He sold everything he owned that didn’t fit into a single box and ventured out onto the road. 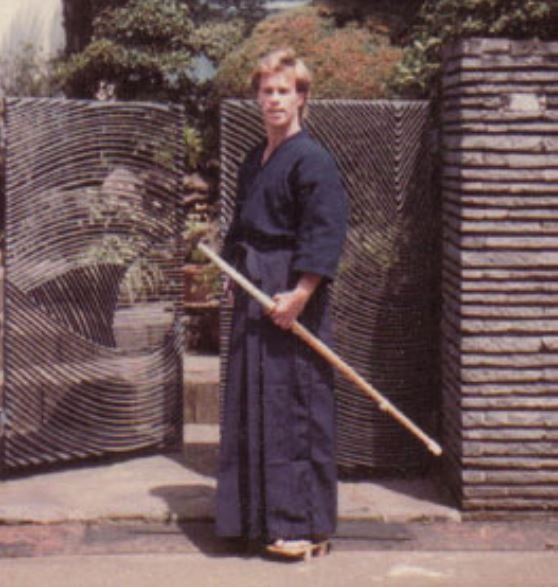 “I started off traveling the United States, Canada, and then south to Mexico,” he said. “The next two decades were spent exploring, while living abroad in Europe and Asia while encountering many wild and crazy adventures during my treks.”

Several adventures that took place before Shihan Abbott even held a katana could warrant feature stories in their own right. He was in China during the student protests and had a bird’s-eye view of the now-infamous Tiananmen Square. Later that year he was in Berlin at the time the wall fell.

He hiked mountain trails on Everest and explored jungles in the Congo, navigated the Silk Road, and crossed deserts on camelback. From skydiving, to scuba diving, sledding in the Arctic Circle, fishing the fjords of Scandinavia and running with the bulls in Spain, Shihan Abbott did everything an adventurous spirit could hope to do – almost.

There was still swordsmanship.

Shihan Abbott has always been a person who turns thoughts into actions, so what happened next shouldn’t come as a surprise. Just as Shihan Abbott had taken his love of geography from academia to real-world experience, he decided to turn his fascination with Japanese swordsmanship into more than a mere interest.

In 1985 Abbott’s travels brought him to Japan. He enrolled in Nihon Taiiku Daigaku, Japan’s prestigious sport science university known for producing famous athletes. Getting accepted into the university was an extremely difficult process. In reminiscence, Shihan Abbott said that it was good fortune to have been granted access to Japanese culture, and the Spartan environment of the Nihon Taiiku Daigaku. 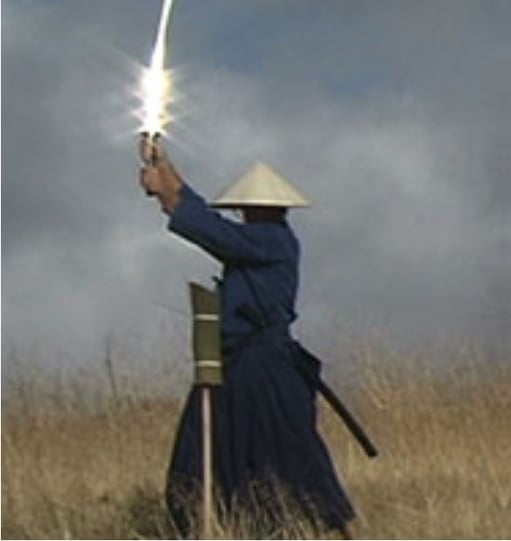 “I must have been very lucky and was in the right place at the right time,” he said.

At the university, he began to study Japan’s national combative sword sport, kendo, and Goshindo, the art of Japanese swordsmanship.

Goshindo consists of three parts: iaido, the art of drawing the sword, tameshigiri, the art of slicing objects, and kendo or kenjutsu, the art of combative sword technique and sparring.

Not content to limit his training to just schooling he began interacting with the Japanese police force. He split his time between doing police-related work with them and practicing kendo for competition to other departments.

Around this time the art of chanbara caught Shihan Abbott’s eye in the local newspaper. Similar to Western swashbuckling or gun slinging, chanbara is a Japanese sword-fighting style perhaps best associated with the movie genre of the same name (think Seven Samurai or Yojimbo). Only relatively recently, in 1971, was chanbara translated into a sport by Tetsundo Tanabe, now Chairman of the International Sport Chanbara Association.

Tanabe’s teacher was the illustrious Nakamura Taizaburo, who was knighted by the emperor for his achievements and dedication to the sword. Shihan Abbott trained at Tanabe’s Hombu Dojo in Yokohama, Japan, where he attained his current rank of Shihan, seventh-degree black belt. 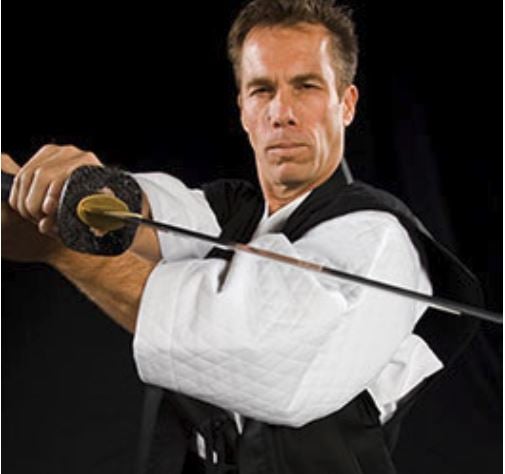 Shihan Abbott liked the quick, energetic style of chanbara fighting and the fact that it used padded weapons, meaning that even very young children could start learning and experienced practitioners could spar at full speed. Despite the modern weapons, chanbara also stressed the self-discipline and precision of Goshindo. It was the best of both worlds for Shihan Abbott. He became a student of Tanabe’s, and found that his earlier sword training made him a quick study.

Although Shihan Abbott loved Japan and his training there, he believed he could make a bigger impact on martial arts world by teaching Goshindo and sport chanbara back in the USA. In 1998 Shihan Abbott

returned to Arizona and founded Samurai Sports, Inc. His establishment offers books plus instruction manuals for learning the art of the sword, as well as school programs for incorporating sword training into martial arts classes. He also provides intensive one-on-one or small group training courses. Shihan Abbott personally has taught and led seminars in over 30 countries.

When Shihan Abbott instructs a chanbara or a Zero to Sixty class, he exudes tons of energy during his fast paced classes. When he teaches traditional or Goshindo, he focuses on “the spirit of the thing” while maintaining a Zen-like teaching fashion so that all levels of students can easily understand and learn.

His dedication to helping all students learn swordsmanship goes beyond just teaching in the classroom. When he returned to the United States, he discovered that there were no practice weapons that were safe for beginning students, with the right flexibility to simulate the feel of a real sword, and durable enough to withstand full-speed sparring. Shihan Abbott solved all three problems, and today you can see his patented design in stores and schools across the country, under the name ActionFlex™.

Shihan Abbott has also authored five books, three swordsmanship training guides, an instructor’s handbook for teaching chanbara, and one historical fiction book, The 47th Ronin. His endeavors to spread Japanese swordsmanship, and his own devotion to the art, have not gone unnoticed. Since 2000, Shihan Abbott has received accolades from well-known institutions like the Black Belt Hall of Fame, USA Martial Arts Hall of Fame, Masters Hall of Fame, and Martial Arts History Museum, to name a few.

Shihan Abbott said he feels “honored by my peers and very humbled,” to have been recognized.

Shihan Abbott has no plans of slowing down any time soon. His efforts spread swordsmanship training across the United States, but he has a broader goal:

“My teacher Tanabe Tetsundo said it best,” Shihan Abbott said, recalling his mentor’s words. “He dreamed of ‘a venue where swordsmen from East and West could compete safely, fairly, free from injury… a learning center attended by a mixture of combatants embracing European, Middle Eastern, Western, Asian and African martial art styles.’”

Or, what Tetsundo and Abbott call, ‘Heaven on earth in one arena.’

Do you know someone who has faced challenges, overcome obstacles, or simply has an amazing martial arts story to tell? If you'd like the story to be considered for a Journey, send me an email at slobban@centurymartialarts.com with the subject line Journeys.

Say “Bonjour” to the French Martial Art of Savate