I frequently find myself inspired by other martial artists. There are so many amazing individuals out there, who are using their talents to make the world a better place.

At a Century video shoot, I had the chance to meet another incredible martial artist who is improving lives in our community in Oklahoma City. Sensei Jennifer Allman is a teacher at Harding Fine Arts Academy in OKC, out of which she runs her Firehawk Martial Arts program. She is using her karate background and teaching abilities to bring martial arts to kids who might not otherwise have had access – and it’s changing the entire school! During a break from shooting, I had the chance to interview Allman. 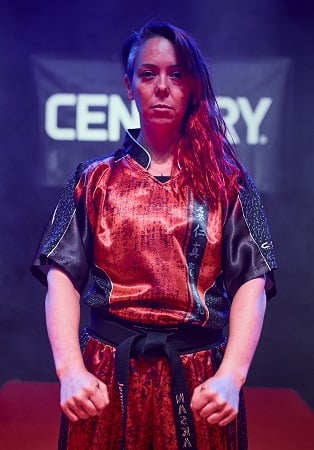 The Centurion: When did you start training martial arts?

Jennifer Allman: I started martial arts when I was around five years old. My dad owned and taught at a karate school. Both me and my brother, I’m pretty sure, were learning karate in diapers. As soon as I could focus long enough to go to class, I started karate at his school.

I trained very consistently until I was around nine, 10 years old. Through some changes in life, my dad ended up having to step away from full-time teaching, so at that point it kind of got put on pause. We would still practice in backyards and friends’ garages, which we did on and off for a couple years. Then it hit a point where it just kind of dwindled off until I was in my 20s.

My husband was talking to my dad, and he said, “Dude, you need to teach me karate!” My husband started training, and I was like, “I can’t let him outrank me! I can’t let him make it to black belt first!” So I picked it back up at that point in my life.

The Centurion: And how did you start your class at Harding?

Jennifer Allman: I began working as a teacher at Harding in 2009, and taught there for two years. My high school does something called “Performance and Exhibition” once or twice a month (where students and others are invited to showcase their talents in front of the school body). We had someone booked who cancelled at the last minute, and my principal was a little stressed out.

I said, “Well, hey, why don’t you let me and my husband and my dad come do a karate demo for you guys?” She was like, “Would you do that? That would be great!”

It went over so spectacularly well. We had kids telling us, “You should do some kind of after-school stuff!” At the time, I was working two jobs, and I couldn’t commit to that. So I talked to my principal and said, “You guys should just let me teach this as a class.” The reaction was like, “Martial arts? I don’t know about that…”

I talked them into it, though! We are an arts integrated high school, and we had the conversation about how martial arts is very much an art. The very next year I started teaching it during the school day. 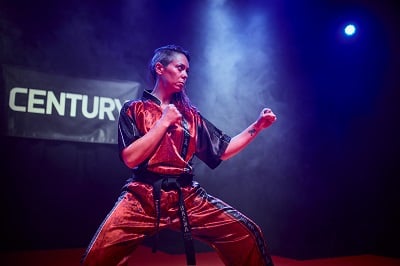 JA: The kids get an additional five minutes to change out of school clothes and into their uniforms. Then they bow in and get warmed up.

Depending on where their focus level is, we might do a little bit of everything: kicking and punching on shields, working on kata, sparring. Sometimes, we start on something and get on a roll, and then it’s like, “We’re going to work on this all class!” I try to take my cues off of them, because I know that sometimes the school day will interfere with what could potentially be an otherwise great day, right?

TC: Around how many students do you have training with you?

JA: This particular year I have 40, between my beginner and my immediate/advanced classes. The most I’ve ever had was 70.

This year, I actually have seven graduating seniors, which is really quite sad for me. I’m excited for them, but I’m sad to see them go. But I also have 15 incoming freshmen at the same time, so that is very promising! I’d say on average, I have 50 students a year.

TC: How do you hold belt tests?

JA: We do belt testing on the weekends. Normally, I’ll hold four belt tests a year, because of (my students’) scheduling. That also gives parents a chance to come in and see what their kids are doing. Occasionally, I’ll get the students whose parents don’t have a nine-to-five, Monday-through-Friday job, so they can’t get there on a weekend. For those students, we just do it during class, and if we have to break it up over two days, then we’ll do that.

The test is longer than a normal class. Our belt tests look very similar to what you’d see at any dojo: they go through their basics, they do their kata, they do their sparring. At a certain rank, they have physical requirements that they have to pass.

TC: Your students don’t just train, though – they also compete! When did they start getting into the competition circuits?

One group of kids was like, “We really like this!” And I said, “Okay, let’s look at trying to do this more regularly—” the problem being, my high school is a Title I school, so 65, 70% of my school is on free or reduced lunch. Monetarily, trying to compete is very difficult. We looked at what we could do to get those kids competing without it having to come out of their pockets.

We started using Donors Choose, which is a program that allows high schools to fundraise, and once we were able to get some funds, we started going to more tournaments. In 2014, we had some kids who competed enough that they took a state title. That was when we made (the competition team) formal: We had a team, and we had tryouts. 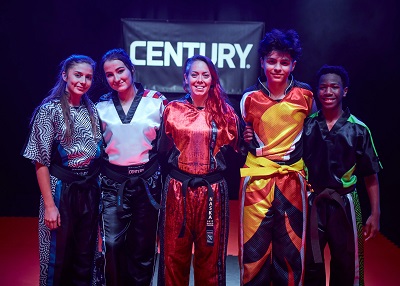 TC: What are some of the tournaments your students have competed it?

JA: As a team, we’ve attended the US Open, the Battle of Atlanta, the Warrior Cup in Chicago, Amerikick Internationals in Philadelphia, the WAKO National Championships in Kansas City, and The Unified Martial Arts Championships in Carrara, Italy!

That is just some of them – we stay pretty busy!

TC: You also compete, don't you?

JA: Yes, I do. I'm a four-time NASKA World Champion winner, and I recently won gold at the USANKF Open in Las Vegas.

TC: What sort of changes have you seen in your school since the initiation of the program?

JA: For starters, my students have to keep their grades up if they want to be eligible to compete. They can’t be failing any classes. The state requires that much, but I tell my competing students, “I expect Cs or higher.” So we’ve seen an improvement in grades.

Even for the students who don’t compete, the rule is that if anyone has a failing grade for more than a week, everyone in the class does pushups. It’s anonymous, so nobody knows who has the failing grade.

I always tell them, “Everyone in here is going to be good at something – who’s good at math?” And I split them up, and say, “Okay, find someone that can help you.” We make (mentorship) a part of that.

Even some other teachers will come to me and say, “Hey, don’t you have this kid in karate class? I’m having a hard time getting them focused.” A lot of times, it just takes me going, “Would you treat me that way in karate class?” And the kid is like, “Well, no.” I tell them, “Okay, I know you don’t like math, or you don’t like history, but that’s still another person.” My principal and other teachers have come to me and said that they’ve seen improvements in kids because of karate.

TC: Are there any individual success stories you can share?

JA: We had one student who was perpetually struggling with grades. He wanted to try out to be on the competitive team, but never did, because he didn’t feel like he would be able to keep his grades up. A teacher approached me and told me about him. I didn’t even realize he was interested in competing!

He did awesome – the kid is a great martial artist. I went ahead and gave him a spot on the team. I got with his teachers and said, “Look, I know this kid struggles. Help me help him. Give him some extra time; let us get him caught up, and then once he gets caught up, I think we can stay at that happy place.” Between some students helping tutor him, and some teachers giving him a little extra time to get out of that hole, we got him to where he was able to spend some two years competing with us and passing, and then ended up graduating and not losing any credits.

TC: That’s awesome! Now, obviously, not every kid is going to have the same problems, or have the same goals to work towards. But if you could have every kid who goes through your program come away with one thing, what would it be?

JA: Self-confidence. Always self-confidence. I want to take the quiet, timid kid, and make them feel comfortable in their own skin. I get so many different kids – I get kids that come in and they have martial arts experience, and so everything comes easily. And then I get the kids where they just struggle, and you see them want to quit, but don’t. I just want them to leave my program believing that they can do anything they try to. Nothing is outside the scope of possibilities.

TC: What would you say to other schools who are either considering adding a martial arts program, or are skeptical of one?

JA: I would say that it is the best thing our school has ever done, and it is hands-down the best part of my day. We have, in the last couple years, hit a point where students try to come to our school because of the martial arts program, because they want to be involved in it.

And it’s character-building, both for the kid who is getting bulled and the bully. I’ve had kids whose teachers have told me, “This kid is a bully.” Most of the time, a bully has a reason, and you just have to find that and break that down. It’s the same with the kid who is being bullied. You have to teach them where that brave person in them is. You can usually eliminate both (problems with bullying and being bullied) at the same time, by giving them that confidence in being okay with who they are. It’s a win-win. We’ve had no downsides.